Thank you to Margaret K. McElderry Books for an e-ARC in exchange for an honest and unbiased review. All quotes are from an advance copy and are subject to change in final publication.

Synopsis: The year is 1926, and Shanghai hums to the tune of debauchery.

A blood feud between two gangs runs the streets red, leaving the city helpless in the grip of chaos. At the heart of it all is eighteen-year-old Juliette Cai, a former flapper who has returned to assume her role as the proud heir of the Scarlet Gang—a network of criminals far above the law. Their only rivals in power are the White Flowers, who have fought the Scarlets for generations. And behind every move is their heir, Roma Montagov, Juliette’s first love…and first betrayal.

But when gangsters on both sides show signs of instability culminating in clawing their own throats out, the people start to whisper. Of a contagion, a madness. Of a monster in the shadows. As the deaths stack up, Juliette and Roma must set their guns—and grudges—aside and work together, for if they can’t stop this mayhem, then there will be no city left for either to rule.

(Zuko voice) Hello, English major here. For those of you who might be new to the party, I happen to be an English major who really does not like Shakespeare. I definitely appreciate a lot of Shakey Boi’s work and the impact he’s had on language and storytelling, but he’s just not my fave. Chloe Gong and These Violent Delights, however, are an entirely different story. In fact, Gong may have made a Shakespeare fan of me yet.

This was her life, this was her city, these were her people, and because she loved them, she had sworn to herself a long time ago that she would do a damn good job of being who she was because she could be no one else.

5 Reasons to Read These Violent Delights

Love the cast of These Violent Delights as much as I do? Check out the quiz I made in collaboration with Caffeine Book Tours to find out which character you are!

Links for These Violent Delights

Add it on Goodreads!

Make sure to check out Caffeine Book’s tour for These Violent Delights and share your results from the quiz below or on Twitter! ♡ 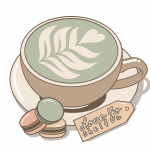 Welcome to our blog! Love Yo Shelf is run by Lauren and Orianna, two recent college grads with a passion for books, diversity, and intersectionality. Our goal is to help people love their shelves, and also themselves by sharing positive representation of traditionally marginalized folks ♡

Support us on ko-fi!

The Rise of Kyoshi
by F.C. Yee

The Archive of the Forgotten
by A.J. Hackwith

The Ethics of Ambiguity
by Simone de Beauvoir

We use cookies on our website to give you the most relevant experience by remembering your preferences and repeat visits. By clicking “Accept”, you consent to the use of ALL the cookies.
Cookie settingsACCEPT
Manage consent

This website uses cookies to improve your experience while you navigate through the website. Out of these, the cookies that are categorized as necessary are stored on your browser as they are essential for the working of basic functionalities of the website. We also use third-party cookies that help us analyze and understand how you use this website. These cookies will be stored in your browser only with your consent. You also have the option to opt-out of these cookies. But opting out of some of these cookies may affect your browsing experience.
Necessary Always Enabled

Any cookies that may not be particularly necessary for the website to function and is used specifically to collect user personal data via analytics, ads, other embedded contents are termed as non-necessary cookies. It is mandatory to procure user consent prior to running these cookies on your website.